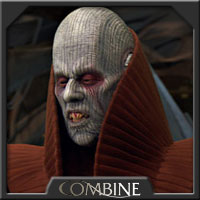 There are two species inhabiting the world of Utapau: the Pau`ans and the Utai. The Pau`ans are a long-lived race and are commonly referred to as the Ancients by off-worlders. They have an ashen and textured skin, onyx-colored eyes. Their lean humanoid bodies are enveloped in thick, layered attire that leaves only their heads and hands exposed. Female Pau`ans reveal even less of themselves and when in public they wear hoods with narrow cowls to conceal their faces. A Pau`an smile is to many a fearsome sight consisting of two rows of long, sharp incisors. The feral teeth are necessitated by a diet consisting entirely of raw meat.

Harsh climate on the surface of Utapau forced Pau`an civilization underground with the Utai, however, the race was marked by a natural aversion to sunlight before that point, which can explain the Pau`an`s pale complexion and pupil-less eyes. Even after becoming subterranean, Pau`ans rarely traveled outside of their city. A Pau`an may be well into late adulthood, which is marked in their fortieth year, before ever leaving the city of his or her birth. The isolation of individual city-states has led to distinct cultural and linguistic differences between their populations. For centuries, this heterogeneity resulted in prejudice and genealogies were strictly maintained to discourage unions outside of one's own city. Disagreements over lineages were capable of sparking bloody confrontations between rival burgs. Once united under a confederated planetary government, however, Utapau began to enjoy nearly four generations of peace, which in terms of long Pau`an lives, spans over 1000 years.

Pau`ans are further evolved than the Utai and they represent the public face of Utapau. The two races fill sympathetic roles, with the Utai performing the more menial functions, such as subjugating the wing-less dragons, while the Pau`an control the planetary government as well as its economic and political relations with the galaxy. In general, the Utapauns are a highly peace-loving peoples and keep neutral politic in the face of the galaxy. When under pressure by foreign governments, Pau`an diplomats are masters of appeasement and their long-lives afford them the patience to outlast most would-be oppressors. While rarely at the forefront of Utapau`s relations with the galaxy, Pau`an females out-number males three-to-one and hold the majority of power within a city. Acting as the head of the family, Pau`an women are also the architects of new cities and local governments. While females also dominate the fields of medicine and science, males lead Pau`an spiritual institutions which tend to emphasize serenity and the belief that a Pau'an's current existence is only a prelude to many more following death.