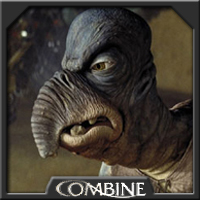 Toydarians are a race of small, winged humanoids with pudgy bodies, trunk-like noses and short, webbed feet. Their skin is usually a grey-blue with the exception of their yellowish stomachs.

Their wide mouths have square, slab-like teeth which are used to grind the tough vegetation and marine life that makes up their natural diet. As the organic matter decomposes in their stomachs, it produces the gas which makes up the majority of their mass, giving them a bloated look. This makes them many times lighter than what their appearance would suggest to other species, allowing them to hover with their small, rapid beating wings. Their light weight also allows them to land on the swamp grass mats which buoy up the cities of their homeworld, where they live beyond the reach of heavier predators.

It is because of these predators that, although able to walk, they prefer to fly whenever possible, to avoid the threats below - despite the effort it requires to beat their wings for long periods of time. Because of this exertion they need to consume a great deal of nutrients to sustain themselves, lest they collapse mid-flight. This is less apparent on their planet Toydar but becomes problematic else where in the galaxy where sustenance is less nutritious.

Like Hutts, Toydarians are tough to deceive, even for Force-users, possibly due to their cunning nature and their lack of gullibility. They are also quick to adapt to introduced technology, either bartering or "liberating" parts from passing foreigners to understand how their hardware works, in order to reproduce knockoffs of their own. This reverse engineered (and often faulty) hardware is then sold to their less tech-savvy neighbours or the unwary traveler. Quality imitations for personal use occasionally surpass the original. This apparent affinity with machines of all varieties stems from their nimble hands and devious minds; they treat every device with the same shrewd logic they apply to the hard bargainer.