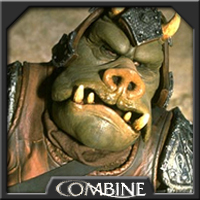 Gamorreans are rude and extremely violent beings, with peculiar snouts and jaws, and small horns protruding from their mouths. The average weight of a full-grown adult is about 100kg. Their tremendous physical strength and limited intelligence make them ideal targets to carry out the hardest of physical tasks, and so they make perfect guards or mercenaries.

Gamorr, the homeworld of these hideous beings, has a hugely varied ecosystem. The planet's poles are uninhabitable, but the equator is covered with lush woods, jungles, rivers and mountains. This environment seems at odds with Gamorr's violent history - its clans are constantly at war with each other, battling for supremacy of the planet.

Gamorrean society is divided up in a curious way - females are in charge of agriculture, hunting, weaving, creating tools and managing businesses, whilst males devote all of their time to training and fighting. Clans are led by matrons that control them and make the most important war-related decisions, such as establishing new alliances and sending males to the place of battle.

The war period lasts from early spring to late autumn, and it is during this time only that Gamorreans attempt to plunder rival clans. They are experts in the use of primitive weapons, such as traditional axes or heavy clubs, and it is considered dishonourable to use technological weapons such as blasters. The males who prove to be the most brave and skilled in combat finally earn the necessary prestige to choose a mate.

To display social status, Gamorreans use Morrts - blood-sucking parasites which feed on the body fluids of a living host. Gamorreans consider these creatures friendly and treat them as pets. The more Morrts a Gamorrean has, the higher his social status, and some of the greatest warlords often display some 20 or more Morrts feeding on their bodies.

Since Gamorreans respect brute strength above all other qualities, they accept work only if it relates in violent activities. In many cases, they will demand that a prospective employer first prove his prowess in a fight before they agree to work for him. For a Gamorrean, it is not deemed worthy to work for anyone who is unable to defeat him (and who is thus inferior).

As far as language is concerned, Gamorreans can understand certain other galactic tongues, but their vocal apparatus does not allow them to speak any language other than their own. This is a fairly primitive system of grunts and growls that is largely incomprehensible to most other species.