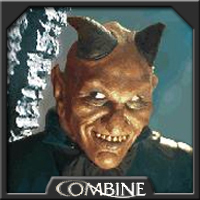 The Devaronian are one of the most unique races in the galaxy, as their male and female sexes are so vastly different in appearance and temperament. The males are docile, non-aggressive creatures with smooth, hairless skin and short horns on their heads. They take great pride in their horns, and groom them quite regularly.

The females, on the other hand, are covered in calico fur and do not have horns. They are aggressive by nature, and tend to dominate their culture. It is believed that they are descended from a race of primates that lived in the mountains of Devaron, their homeworld, and that their horns were a genetic mutation that proved useful in fending off predatory birds.

Devaronians are carnivores and generally have a ferocious and efficient metabolism. Devaronians were one of the first races to discover the secrets to space travel and develop stardrives.